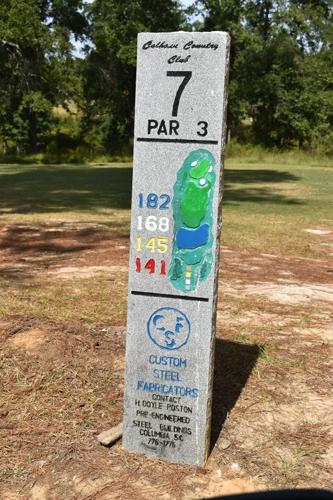 Calhoun County High’s Art in Action students made their way to the 18-hole county-owned golf course to touch up areas that haven’t been worked on in years.

“The (hole) markers have not been painted in years, and so I've got some very talented art students here at Calhoun County High School. And so we volunteered to help the county out and repaint these markers,” Calhoun County High art teacher John Sawvell said.

The group of 32 students took on the project to beautify and create pride. For Sawvell, it was an opportunity for the students to get a new experience.

“They've never seen a golf club before. A lot of them, that was the first time they've ever seen a golf ball," Sawvell said. "Onsite we had one of the golfers give them some instruction and so it was a great learning opportunity for the students."

At first the students were hesitant about the project, but they opened up to it and enjoyed themselves, Sawvell said.

“They weren't sure, because a lot of them had never been to a golf course before. They were kind of like well, 'OK, let's try,’” Sawvell said.

“Towards the end of the event, I had some golf clubs out there and we had a putting contest. I know that the county enjoyed our talent and being able to get these markers repainted, but I think I'd say my students benefited more from this community event. For me, it was really a good experience, for everybody,” Sawvell said.

The project originated with a goal of doing something positive for youth. A conversation between representatives from the county and Calhoun County School District Superintendent Dr. Ferlondo Tullock got things going.

“What we're seeing is a lot of young folks will go off to college, largest cities, metropolitan areas and they don't return home or they'll get jobs in those large areas. They don't return. Our community is becoming smaller and smaller,” Tullock said.

“We're trying to help people get within the community. Through those conversations, the ideas came up about some projects to get involved with. The golf course was one of the first ones that has kind of taken off,” Tullock said.

The students enjoyed being outside and the new experience. It gave them something to do and bond over while doing something good for the community, Sawvell said.

For Sawvell, it marked something special for him, with the students not only being able to get new experiences in a metaphorical sense, but also in an artistic sense.

“One thing I really liked is that many of these students had not had an opportunity to paint in a professional setting. I gave them a task which they were not used to. I had some training there on site with them on how to do the task, but many of them never painted in this type of setting before. In turn, they excelled, they did a great job. I was very impressed with their work ethic,” Sawvell said.

Tullock was more impressed with how the students helped make something positive in one of the areas where they live.

“We're building pride in our community. This will help them understand the importance of being part of a community and doing things that will beautify our community.

“To make it attractive not only for them, but also for our elderly folks, as well as newcomers to the community,” Tullock said.

Tullock said students bonding over this will create a sense of being part of something bigger than themselves, with them working collectively to make it happen.

“I liked seeing my students enjoying an opportunity and an event. I see them seeing that they accomplished something and it improves their self-esteem, I felt joyous,” Sawvell said.

Tullock hopes that the next generation of high school students can see the project and be inspired by it. This could create an opportunity for more to want to participate in the future.

“My hope is younger students will ... say, ‘I want to be a part of that. I saw that my brother did my sister did a relative or even a friend,'" Tullock said.

The project is part of Calhoun County’s Youth and Leadership Retention Program.

Terry Benjamin II, a Claflin University mass communications senior, is reporting for The Times and Democrat as a Lee Enterprises-sponsored news-sports intern.